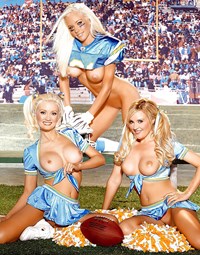 For this week’s “Throwback Thursday” we take a look at the ultimate compilation of Kendra Wilkinson’s uncensored nude moments from behind-the-scenes of her hit reality TV shows “The Girls Next Door” and “Kendra” in the video above.

It is easy to see why Kendra’s “The Girls Next Door” series was so popular, as infidel audiences got to catch a glimpse of what a harem of a (moderately poor) Muslim man is like.

Of course your typical limp dick kuffar male can not handle even one moist hole, let alone nine… So “The Girls Next Door” quickly became too unrelatable in the West and went off the air. For her part Kendra transitioned into doing something that the infidel audiences could connect with on a personal level by becoming a mudshark, and marrying a closeted homofag dirt skin football player on her show “Kendra”.

Thus Kendra not only prolonged her time in the spotlight, but fulfilled her destiny by becoming the coal burning white trailer trash gutter skank that she was destined to be from her early sex tape days banging her mentally challenged cousin Earl.